Earth's critical zone is the heterogeneous, near surface environment in which complex interactions involving rock, soil, water, air and living organisms regulate the natural habitat and determine the availability of life-sustaining resources. As far as we know, Earth is unique in the level of biological complexity that drives many of the chemical reactions that occur in the critical zone. Life depends on electron transfers that primarily start with solar capture and flow through reaction chains that change the forms of many elements that are otherwise locked in rocks or in dead organic matter. As a consequence, our group focuses on the chemical processes that determine the forms and availability of phosphorus (P), sulfur (S) and carbon (C) compounds, and trace metals. We combine molecular-scale characterization (with synchrotron X-ray techniques, ESI-FTICR mass spectrometry, and NMR spectroscopy) and isotope techniques to understand their chemical speciation, transformation, distribution and availability at ecosystem scales, and to evaluate their responses to climate change and human perturbation (e.g., changes in land use and cover). Along with advanced analytical techniques, we use environmental gradients (soil chrnosequence, climate, weathering profiles) to provide natural experiments designed to understand how the critical zone responds to different forcing functions.

Sequential chemical extraction has been widely used to study soil phosphorus (P) dynamics and inform nutrient management, but its efficacy for assigning P into biologically meaningful pools remains unknown. Here, we evaluated the accuracy of the modified Hedley extraction scheme using P K-edge X-ray absorption near-edge structure (XANES) spectroscopy for nine carbonate-free soil samples with diverse chemical and mineralogical properties resulting from different degrees of soil development. For most samples, the extraction markedly overestimated the pool size of calcium-bound P (Ca-P, extracted by 1 M HCl) due to (1) P redistribution during the alkaline extractions (0.5 M NaHCO3 and then 0.1 M NaOH), creating new Ca-P via formation of Ca phosphates between NaOH-desorbed phosphate and exchangeable Ca2+ and/or (2) dissolution of poorly crystalline Fe and Al oxides by 1 M HCl, releasing P occluded by these oxides into solution. The first mechanism may occur in soils rich in well-crystallized minerals and exchangeable Ca2+ regardless of the presence or absence of CaCO3, whereas the second mechanism likely operates in soils rich in poorly crystalline Fe and Al minerals. The overestimation of Ca-P simultaneously caused underestimation of the pools extracted by the alkaline solutions. Our findings identify key edaphic parameters that remarkably influenced the extractions, which will strengthen our understanding of soil P dynamics using this widely accepted procedure.

Comparisons between P K-edge XANES spectra of the residues before and after each major extraction step for SAGA (a-d) and Merced (e-g) chronosequences. The spectra of hot concentrated HCl (C-HCl) residues for the Merced soils were not presented here due to their poor spectral quality. D-HCl: 1 M HCl.

Possible processes (a-c) that can lead to overestimation of Ca-P by modified Hedley sequential fractionations. The forms of Fe- and Al-P, i.e., adsorbed or occluded, by poorly crystalline or well-crystallized minerals, together with the presence of CaCO3 and exchangeable Ca2+ in soils, likely determine the misquantification of P fractionated by the modified Hedley protocol. In (a), the overestimation of Ca-P is caused by redistribution of mineral surface-adsorbed P (by either poorly crystalline or well-crystallized Fe/Al-bearing minerals) to Ca-P via reaction of desorbed P with CaCO3 present in the soils, during NaOH extraction. In (b), the overestimation of Ca-P is caused by reaction between exchangeable Ca2+ and desorbed P and ternary surface complexes, such as >Fe-PO4-Ca may form as intermediates. In (c), P is occluded by poorly crystalline minerals, which may not be dissolved by 0.1 M NaOH but dissolvable by 1 M HCl, leading to overestimation of Ca-P. In (d), P is occluded by well-crystallized minerals and can be dissolved by neither NaOH nor 1 M HCl. The occluded P could be incorporated into the mineral crystal structure or physically trapped by mineral particle aggregates.

Aeolian dust deposition is an important phosphorus (P) input to terrestrial ecosystems, but its influence on P dynamics during long-term ecosystem development remains poorly understood. In this study, we characterized P speciation using P K-edge XANES spectroscopy in surface soils (0-15 cm, A horizon) and contemporary aeolian dust collected at each site of a 3000-ky volcanic soil chronosequence in a cool, semi-arid environment. Phosphorus speciation in dust was dominated by calcium-bound P (Ca-P; 54-74%), with 11-23% iron and aluminum-bound P [(Fe+Al)-P] and 7-25% organic P (Po). In soils, Po contributed 1-23% of total P, being greater in older soils; however, the proportions of Ca-P (16-39%) and (Fe+Al)-P (48-82%) fluctuated with increasing weathering over the soil chronosequence. These soil fluctuations resulted from the accumulation and preservation of alkaline aeolian dust during pedogenesis in the semi-arid climate, which significantly increased soil Ca-P while decreasing the total amounts and relative abundances of soil (Fe+Al)-P. We suggest that the effects of an aeolian dust input on soil P transformations are functions of the relative magnitude and chemical composition of the dust input and the soil weathering intensity. For a given source of dust, when the net dust flux is greater than the weathering rate, dust accumulates and thus alters the pattern of P transformations during pedogenesis; otherwise, the dust influence on soil P transformations is negligible. By accurately identifying the chemical nature of P pools, our work highlights the advantage of P K-edge XANES spectroscopy over chemical extractions in examining soil P dynamics, and demonstrates how dust inputs can modify the Walker and Syers model of pedogenic P transformations in semi-arid environments. Overall, this work provides a foundation for understanding how dust influences P cycling during soil and ecosystem development, and indicates that dust inputs and composition, and the soil weathering rate, all must be considered for developing integrated climate-biogeochemical models with predictive power in terrestrial ecosystems.

Phosphorus transformations during pedogenesis described using the Walker and Syers model assuming no significant external disturbance, such as dust input during soil development; (b) changes of the P pools of the Walker and Syers model in the surface soils (0 -15 cm) during soil development across the substrate age gradient of Arizona (SAGA) as measured by the modified Hedley chemical sequential extractions. These data were reported previously in Selmants and Hart (2010); and (c) The XANES-determined P speciation changes in these soils in the present study. The total P concentrations in (b) and (c) were measured respectively in Selmants and Hart (2010) and in the present study, so the values at each substrate age were slightly different.

The phosphorus K-edge XANES spectra of standard compounds used in the linear combination fitting (a) and comparisons of the linear combination fits and the spectra obtained from surface soil, (b) and dust (c) collected along the substrate age gradient. HAP: hydroxyl apatite; Ferrihydrite-P, AAH-P and Kaolinite-P are Fe-bound and Al-bound P, represented by phosphate adsorbed on ferrihydrite, amorphous Al hydroxides (AAH), and kaolinite, respectively. 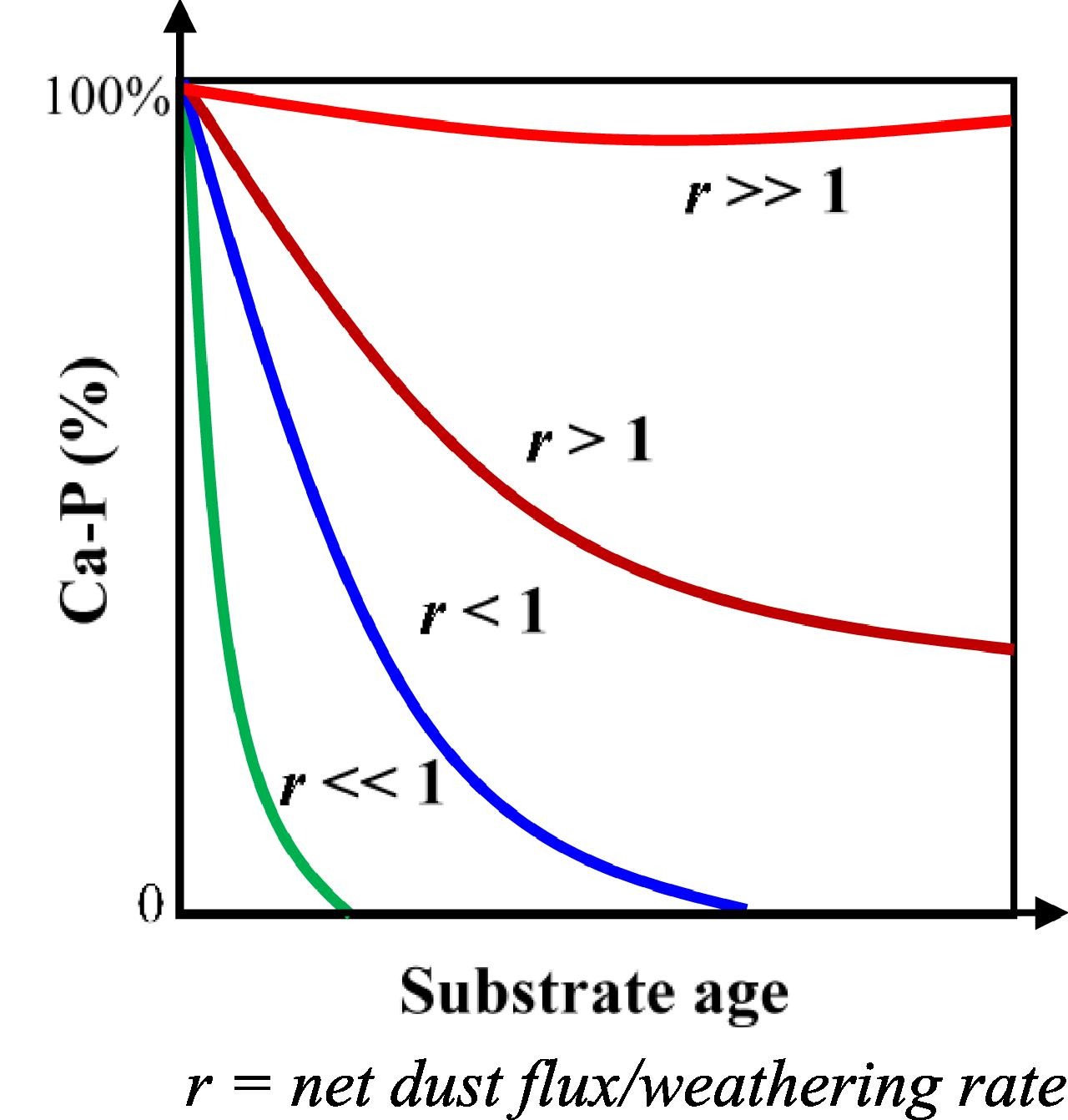 A conceptual model describing how the relative magnitude (r) of the net dust flux to the dust weathering rate affects the soil Ca-P proportions during long-term soil development in semi-arid or humid environments. This model assumes that (1) deposited dust is alkaline (less weathered than soil) as aeolian dust are usually generated from drylands although not always (Wagenbach and Geis, 1989), (2) that deposited dust remains the same in chemical composition and mineralogy during soil development, and (3) that climate conditions do not change. In reality, these factors fluctuate more or less, such as during the Quaternary period. Thus, fluctuations of the Ca-P proportions with ecosystem development are expected, as shown in the present study; but overall, the Ca-P proportions are elevated by dust input.

Aeolian dust is a significant source of phosphorus (P) to alpine oligotrophic lakes, but P speciation in dust and source sediments and its release kinetics to lake water remain unknown. Phosphorus K-edge XANES spectroscopy shows that calcium-bound P (Ca-P) is dominant in 10 of 12 dust samples (41-74%) deposited on snow in the central Rocky Mountains and all 42 source sediment samples (the fine fraction) (68-80%), with a lower proportion in dust probably because acidic snowmelt dissolves some Ca-P in dust before collection. Iron-bound P (Fe-P, ~54%) dominates in the remaining two dust samples. Chemical extractions (SEDEX) on these samples provide inaccurate results because of unselective extraction of targeted species and artifacts introduced by the extractions. Dust releases increasingly more P in synthetic lake water within 6-72 h thanks to dissolution of Ca-P, but dust release of P declines afterward due to back adsorption of P onto Fe oxides present in the dust. The back sorption is stronger for the dust with a lower degree of P saturation determined by oxalate extraction. This work suggests that P speciation, poorly crystalline minerals in the dust, and lake acidification all affect the availability and fate of dust-borne P in lakes.


(A) Moderate resolution imaging spectroradiometer (MODIS) satellite image showing a major dust event originating in the Four Corners region of the southern Colorado Plateau on April 16, 2013.  Red lines outline the extent of dust emission visible on this image. Dust trajectory is towards the dust on snow sites (yellow circles) to the northeast. Other potential dust source areas in eastern Utah are obscured by clouds.

A satellite image showing the locations where the dust (yellow circles) and source sediment (white circles) samples were collected. The dust sampling sites are located in the central Rocky Mountains of Colorado.